We’ve got one of the big pre-Christmas highlights today with the second day of the Cheltenham December Meeting from the home of jumps racing.

We’ve four live ITV races to take in from Prestbury Park, with the Caspian Caviar Gold Cup (1.55) and the Unibet International Hurdle (3.05) the two big highlights.

Trainer, Paul Nicholls has landed today’s Caspian Caviar Gold Cup five times since 2009, including 12 months ago and looks to have another good decent hand with Secret Investor and recent BetVictor Gold Cup runner-up - Brelan D’As – in the race.

Then, in the International Hurdle we get a chance to see last season’s Triumph Hurdle hero – Pentland Hills – back on the track. He’ll be hoping to take this in preparation for the Champion Hurdle in March – a race he’s currently around 7/1 for.

Then up at Doncaster we’ve three more LIVE ITV races to take in. They will be hoping to beat the weather and get their meeting on as they’ve lost a few high-profile fixtures of late – fingers crossed for them!

Sherwood Strikes Again: We mentioned last week the good form of the Oliver Sherwood yard and there doesn’t seem to be any let-up. The former Grand National-winning yard fired in another two big Saturday winners as their SAMMY BILL (1st 5/2) and DOMINATEUR (1st 11/2) won at Aintree and Chepstow. Both look worth supporting in the coming months - those wins were their fourth and fifth success since last November and have now fired in 19 successes this season so far (10th Dec)

TQ Horse To Note………………………………..HOGANS HEIGHT – Okay, Jamie’s horse was a slightly surprising winner of last Saturday’s Grand Sefton Handicap over the National fences at Aintree, but he clearly loved the experience and it’s now all systems go with a possible tilt at the ‘big one’ – the Grand National in April. The original plan had been the Aintree Foxhunters, but after such a solid run and a 14lb rise in the handicap he could now get into the National. His 8 year-old powered away to win by 16 lengths at the weekend and relished the different test the unique National fences provided. Jamie’s sure to keep him ticking over between now and next April – with a spin over hurdles likely in March and then hopefully onto the National. The dream is alive and so he’s a horse whose progress we’ll be following with a lot of interest.

Agent Of Fortune - First run for the stable after coming from Christine Dunnett. Has had 24 runs before so experiences and has been working very well. Not got the best draw but hopefully can overcome it which should give the horse every chance. 2 1/2 stars. 1st 7/4 (from 3/1) GARY MOORE 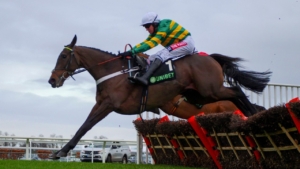 TQ VERDICT: Super-competitive renewal, but having trained five winners of this race – including 12 months ago – then I’m happy to side with the Paul Nicholls pair of SECRET INVESTOR and BRELAN D’AS. The last-named ran a blinder in the BetVictor Gold Cup here last month (2nd) and despite being raised 5lbs for that should be cherry-ripe for this. He won on his third run back last season and that came around this time of the year as well. Soft ground, the trip and the track are clearly all fine and Barry Geraghty sticks with him in the saddle too. Secret Investor is the other Nicholls runner and he ran well in a Grade Two at Down Royal last time out (2nd). He’s only had 6 runs over fences, but has finished in the top two in five of those. Yes, his lack of experience at the track (having first run) is a small worry, but he’s a solid jumper and no reason to think Cheltenham won’t suit. With only 6 career runs over fences he should have more in the locker too – Harry Cobden rides. Of the rest, Riders OntheStorm has been popular all week in the betting, but looks little value now, while top-weight Cepage is another to note being the top-rated in the field, but it won’t be easy lumping 11-12 round. At those at bigger prices, I think Good Man Pat can go well, plus Keeper Hill and Generous Day will be full of confidence after good wins last time out, albeit in slightly lesser races. Willie Mullins has a rare runner in the race – Robin Des Foret – but the final one that might be worth having a small interest in is LALOR (e/w). Yes, he’s not quite gone onto fulfil his potential he promised but the step up to 2m4f could be interesting and he’s got fair form here at Cheltenham – 3 runs, 1 win and a second. The cheekpieces are also on for the first time, which might help settle him better – we’ll see, but be could be the interesting one in the field.

TQ VERDICT: Course winner – Champagne Well – can make it’s presence felt, plus the Henderson 10 year-old Valtor is showing no signs of old age yet after a good win at Ascot last month. He’s the top-rated in the field and has to be respected – Henderson could run Igor too. If running, the Paul Nicholls-trained Saint Xavier also looks interesting on what would be the horse’s first run for the yard after coming over from France – the betting will be our best guide here. The Mulcair won well at Southwell last time but didn’t seem to beat much and this will be harder, so the call here is for the Jamie Snowden runner – KILTEALY BRIGGS – to continue it’s upward curve. Yes, he beat very little at Hexham last time out, but did it very well in the end and is clearly held in high regard to be pitched here. The longer trip could also eke out a bit more and should the ground get any worse he’s proven with plenty of give.

TQ VERDICT: The likes of Elixir De Nutz, Call Me Lord, who is actually the top-rated in the field, Monsieur Lecoq and previous Festival winner – Ch’tibello – can go well, but this race revolves around last season’s Triumph Hurdle hero – PENTLAND HILLS. This Nicky Henderson runner is 3-from-3 over hurdles and rounded off last term with a cracking win at Aintree – beating Fakir D’oudairies. He’s sure to be well tuned-up for this but won first time back last season so the break isn’t a big concern. He’s around 7/1 for the Champion Hurdle – so you feel he’d need to take this if he’s looking to head to that opening day Festival showpiece. Le Patriote is another to consider of the bigger-priced ones, but the danger can come from BALLYANDY (e/w) – if running. The Nigel Twiston-Davies yard have a solid record in this race and it’s interesting that connections are dropping him back in trip. He stays further than this 2m1f trip, while his overall Cheltenham record is good, with two wins, plus four top three finishes from 8 runs here.

TQ VERDICT: If running, the Henderson-trained Dame De Compagnie will be hard to beat. She’s one of just two proven CD winners in the field and ran a blinder to be 5th on her return run in the Greatwood Hurdle here last month. That came off a 577-day break so we can expect that to have blow the cobwebs away too. INDEFATIGABLE (e/w) is the other CD winner in the line-up, but she’s also got 11-10 to carry and that won’t be easy. She ran Lady Buttons close last time and that form would see her go close here. The longer trip will suit and she’s the top-rated in the field. Carrolls Milan, Mega Yeats and Queens Cave are others that can make their presence felt, but MISTY BLOOM (e/w) is the other of interest. She’s won two of her last three and was an impressive 6 length winner at Wincanton last time out. This will require more but the Emma Lavelle yard are going well and she looks a hurdler on the up.

Note: from 2013 back the race was run at Lingfield Park

TQ VERDICT: This looks a straight shootout between Windsor Avenue and SAM SPINNER, with preference for the later. Windsor Avenue has still done little wrong in winning both starts over fences and was very impressive last time at Carlisle – winning by 12 lengths – but the extra half a mile will pose a few questions. However, I’ve been impressive with the Sam Spinner, who is also 2-from-2 over fences and having won already over this 3m trip, then that looks key to be and the deciding factor. He looks a decent stayer in the making and the long Donny straight should be right up his street.

TQ VERDICT: If running, the Nicky Henderson entry – Tombee Du Ciel – will be popular in a race the yard have done well in over the years – winning it in 2017 and 2014, both for this owner too. Goobinator won well on hurdles debut at Wetherby too and looks above average for the Donald McCain team, but the call here is PASEO (e/w). This Oliver Sherwood yard are going very well at the moment and this 3 year-old improved again last time to win at Fontwell and looks the type to have more to come. He stays further than this, which might help in conditions, and with only three runs over hurdles will certainly have more.

TQ VERDICT: With 6 of the last 10 winners aged 7 years-old then the Jonjo O’Neill runner – Cloth Cap – gets the nod here. He will be a lot fitter for runs at Chepstow and Ascot this season and last season’s Scottish National third will have the plenty of stamina over this 3m trip and if the ground dries out a tad that will help his cause too. But the pick here is MY OLD GOLD, for the Nicky Richards yard. This 9 year-old ran a blinder to be beaten only 14 lengths behind Lostintranslation at Carlisle last time. The winner has since franked the form and is one of the leading fancies for the King George on Boxing Day, so that run has a solid look to it. He’s also won over this 3m trip and that outing should also have brought him on.