Well, that’s another Christmas and New Year done-and-dusted – we hope you had a good one!

We are now into January and unless it’s your birthday month, then it’s most people’s worst time of the year. That also translates to the horse racing world with not as many decent midweek fixtures to get stuck into – with the best of the action ringfenced to the weekends.

And we get going on that score this Saturday with two nice cards from Wincanton and Sandown – we’ve seven LIVE ITV races to take in across the two venues.

The main weekend race is the Grade One Unibet Tolworth Novices’ Hurdle (2.25) – as we get a chance to see some of the stars of the future on show. In recent years, 14 of the last 15 Tolworth Hurdle winners were placed in the top 2 last time out and had also run in the last 6 weeks – there are more key trends, plus we take a look at the race in a bit more detail below.

As always, we’ve got it all covered with free tips and all the key trends for the LIVE ITV races.

TQ VIEW ENDS YEAR ON A HIGH (+99pts):  It was another nice year for the TQ View selections as we ended up +99pts ahead (see below) and ended 2019 on high too. Just after Christmas we saw the Gay Kelleway-trained ROBERO (1st 9/2) win well, while on New Year’s Eve it was the turn of Oliver Sherwood as his SEASTON SPIRIT (1st 10/3) continued it’s upward curve to win well again and looks a horse to follow for the rest of the season – especially on soft or heavy ground.

TQ Horse To Note………………………………..The Suzy Smith-trained CLONDAW BISTO (7/2) was a nice winner at Fakenham on New Year’s Day, but that success was made even better as the horse ran a stinker in the first half of the contest. Yes, several poor jumps at the beginning of the race saw Suzy’s horse detached at the back of the field and must have traded big in-running. However, despite Fakenham being a tight track the 9 year-old seemed to get it’s act together and luckily had 3m5f to get back into the race. In the end he won by 3 ¾ lengths and looked to have more to come, so over a similar trip and in a similar class of race then we feel Suzy’s horse should be noted next time.

USE THE TQ INFO TO BACK OR LAY – Also, a lot of our members use the TRAINERS-QUOTES info to lay horses as well as back them – there are plenty of angles these days with the betting exchanges!! Or even back other horses in certain races with the trainers also taking about other horses in races they’ve heard good words about! 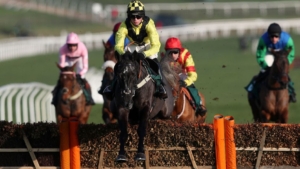 TQ VERDICT: Darebin took this race last year so has to be respected but is 3lbs higher this time and also has a bit to find with JOHNBB after running third to that Tom Lacey runner here last month. That winner is 6lbs higher this time, but won by an easy 3 ¼ lengths and that smooth success indicted there is more in the locker, while with the top-weight Delire D’Estruval in the race and also upped in grade then Lacey’s chaser is actually carrying 5lbs less in actual weight. Another to note is recent winner – Locker Room Talk – who looks an improving chaser that goes well for his 7lb claiming jockey – Jack Savage – a 7lbs rise in the ratings means more is needed, but he certainly looks to be going the right way.

TQ VERDICT: Silver Hallmark was a nice winner at Chepstow last time out and can go well, but this race looks to revolve around the top three in the market – Hang In There, proven CD winner Fidderontheroof and SON OF CAMAS. All three head here with growing reputations and also off the back of nice wins so a case really can be made for them all. However, it’s the Nicky Henderson-trained SON OF CAMAS that I’ll be siding with. This 5 year-old was a nice winner on his hurdles debut at Newbury last time out and the second – King Roland – has since come out and won to frank the form. Yes, this will be harder, but with only three career runs should have more improvement to come and also showed he handled soft ground well last time out – a win here and the Supreme Novices’ Hurdles at the Cheltenham Festival might be on the cards. Hang In There is the top-rated in the field so sets the standard and was a top winner at Cheltenham last time out – beating the in-form Pacify – so looks a big player, while Fiddlerontheroof handled the soft/heavy ground well here last time to win by 7 lengths and with that proven course form is sure to have his supporters too. Of the rest, Jeremys Flame comes over from Ireland, but of those at a bigger price the Paul Nicholls runner – CALVA D’AUGE (e/w) might run better than it’s odds suggest. The yard has a nice record in the race – winning it 4 times in the last 15 years – while a recent second behind the useful Thebannerkingrebel might actually turn out to be fair form.

TQ VERDICT: Some old faces on show here for this veteran’s race. The Venetia Williams team took the race last year so will be trying to follow-up – this time with Burtons Well. Carole’s Destrier, Dark Flame and Shanroe Santos are all past course winners so have to be on the shortlist too. Evan Williams is another yard that’s won this race in the past so their pair – King’s Odyssey and On Tour are others to consider and of that two ON TOUR (e/w) looks interesting with Richard Johnson booked to ride. He gets in with just 10-10 to carry and the first-time visor looks an interesting addition after not travelling last time out at Aintree. The horse has been freshened up too and there is every chance that last run came a bit too soon after running Vieux Lion Rouge to a neck at Chepstow the time before. Of the rest, the in-form Jepeck is one of just a few recent winners in the race but this looks harder, while SMOOTH STEPPER (e/w) ran well to run King’s Odyssey close at Warwick last time out. That run came off a 228-day break too so will be much fitter for it.

TQ VERDICT: Anything the Nicky Henderson yard run here has to be respected as they’ve won the race four times in the last 14 years – they’ve Gunnery, who looks their main hope after an easy win at Doncaster recently, and Mill Green. CD winners Eldorado Allen and Ainchea are others to note, while if running – Smarty Wild and Blu Cavalier enter the picture. But the call here is for the front-running – TOTTERDOWN – to run another bold race from the front. This Fergal O’Brien-trained runner has now won twice at the track and was an easy 10 length winner here back in November. Yes, a 12lb hike for that looks a bit steep but he handles the soft-heavy ground well and if able to get into a nice rhythm out in front again might just be hard to peg back. The more rain the better too – his form in heavy ground reads 1-1-3-1.

TQ VERDICT: Only seven runners here and most have plenty to prove. So, it might just pay to stick with the two yards that do okay with their chasers at the track. The Paul Nicholls team boasts a 31% record here over fences so their SAINTEMILION, who was a close second last time out at Wincanton, looks a solid option. He handles the soft ground well and is only 3lbs higher for that last run – with a lot of out-of-form runners in the field that form would give him a big chance. The other stable that do well here is Evan Williams (21%), so their CESAR COLLONGES might be worth a small saver too. Yes, he will need to improve on his recent 8th at Sandown but is 3lbs lower here and should be better for the run as it was only his second of the season. The first-time cheekpieces are also an interesting addition. Of the rest, course winners – Molineaux and Admiral’s Secret – would also enter the mix based on their proven form at this venue.

Just 3 previous runnings
Trainers Jonjo O’Neill, Henry Daly and Tom George were previous winners
3/3 – Winners aged between 5-7 years-old
3/3 – Returned 8/1 or shorter in the betting
2/3 – Carried 11-10 or more in weight
Trainer Philip Hobbs is just 9 from 89 with his hurdlers at the track

TQ VERDICT: The Philip Hobbs yard don’t have the best of records here with their hurdlers so their Horse Force One is overlooked. We’ve only three previous runs to go on too, but with the Jonjo O’Neill teams having won this race in the past then their MAYPOLE CLASS looks interesting. This 6 year-old also ticks all the limited main trends, plus also heads here off the back of a good win at Lingfield. He’s up 7lbs for that and Jonjo O’Neill Jnr can’t claim 3lbs this time, but the horse handled soft/heavy ground very well that day and in this better race gets in with 7lbs less in actual weight to carry. The longer trip can also eke out a bit more improvement. Of the rest, the main dangers can come from the only proven CD winner in the field – Nifty Fifty – and recent winner Rootless Tree.

TQ VERDICT: Just the five runners heading to post here, but still a nice little contest. The 13 year-old Valdez is showing that age is no barrier as he won back in November (as a 12 year-old) at Hereford but is 5lbs higher this time and this is a better race too. GALA BALL is the only course winner in the field but flopped at Newbury last time out so will need to put that run behind him. On a plus, he’s finished in the top three in 7 of his 8 runs over fences so if you can forgive that last effort then he can’t be ruled  out – the softer ground will certainly help his chance and really that last run was too bad to be true – he might be worth chancing. Le Rocher, Pingshou and As De Mee make up the field and cases can certainly be made for all three too. But, Pingshou will need to bounce back from a fall last time out at Ascot (beaten at the time) and Le Rocher’s fitness will be taken on trust after a 335 day break. So, the Paul Nicholls-trained AS DE MEE rates the main danger to the selection. The yard to well at the track with their chasers and he didn’t run too badly in the Becher Chase last time out. He’s a pound lower this time and connections also put on the 7lbs claimer, Bryan Carver, to help bring his weight down further.