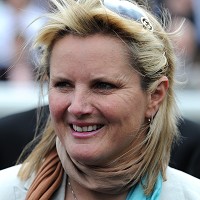 Gay Kelleway started training in 1991. She has been described by the national media "As one of the most exciting and talented trainers of modern times".

7 years old finished second in the ladies Amateur Championship, she then won it at 18, check to see if anyone else has won it that young! After that she turned professional and became Champion Professional Lady Rider three years in a row. Gay was the first woman to ride in a Gold Cup at Ascot on Pretty Picture and the first woman to ride a winner at Royal Ascot when her horse Sprowston Boy won. In total, Gay rode some 60 winners, no mean feat in a country where racing is 95% male orientated.

Her passion for racing took her to New Zealand for the winter winning big races at both the Auckland tracks Ellerslie and Avondale as there were more opportunities for women jockeys, but a constant struggle with her weight made her ill so she decided to give up race riding and return to Britain. After retiring from race riding she spent a year working in Media which stood her in good stead to start training. She moved back to Newmarket in 1991 and brought a horse called Aberfoyle for 3000 guineas. After four wins, she was hooked! Gay started out by renting a few boxes from Bob Champion but then moved to the state of the art, Whitcombe Manor where she felt it would be the difference between a local B & B and The Hilton.

Gay is now back in Newmarket - and training in France - after a period training both in Dubai and in Lingfield. Her yard is extremely well organised. Gay has to work long hours but still tries to find time for her many friends and is always a very popular party guest. She continues to ride out, makes entries and oversees much of the feeding and training regimes. She is then often off to the races to meet up with her owners and enjoy another day at the races.

Gay's owners know that their horses are always given individual care and attention and that if the horse has ability she will do her very best to get them to show their true potential. Owners will have full choice of jockeys and we always use the best jockeys available on the day. Very often owners will bring horses to Gay where they may not have sparkled with other trainers, and nothing gives her more satisfaction than seeing the horse win, and the faces of the owners when their pride and joy is led into the Winners Enclosure!