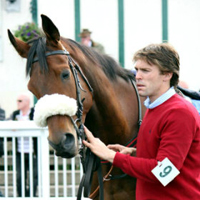 Over the years, Michael has worked / ridden out for numerous trainers, including Nigel Twiston-Davies, Dennis Caro, James Fanshawe and Martin Pipe, where valuable experience has been gained along the way.

Training started at Eccleswall Court in 2005, when Michael’s grandfather, Michael senior, took out his licence once again. Michael worked with his father, assisting Michael senior with the training of the yard’s horses. During this time the yard had a few big wins including Heltornic at Wetherby and Haydock, and The Wicketkeeper winning a listed race at Ascot.

Michael took over the trainers licence from his grandfather in April 2008, following a season as an amateur jockey, winning 4 races. On 30th May he saddled his first winner; Directa’s Digger on the flat at Haydock. On 25th August he saddled his first National Hunt winners at Huntingdon, a double, with Dark Energy and Fourpointone.

However, to date, Michael’s biggest win came in the Coral-Welsh National in 2012, when he trained Monbeg Dude to land the historic race.

Michael has runners both on the flat and over the jumps, but it’s over the sticks that you’ll find most of his entries. Over the last five seasons (2014-2019) he’s sent out over 75 winners and banked £900k in total prize money in the process.