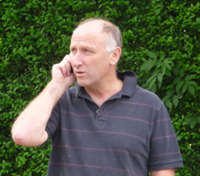 Based in Rhonehurst, Upper Lambourn the Oliver Sherwood yard has been firing in the winners now for over 25 years. In fact they’ve sent out over 850 winners, including six Cheltenham Festival successes, with 57 their best-ever tally in a season to-date (1989-90).

Many people will remember Large Action, who won three Grade ones, as the high-class hurdler they trained back in the 90s, while back then Jamie Osborne, now a trainer in his own right, was often seen riding the bulk of their runners.

The Rhonehurst yard is also steeped in history with the legendary Battleship having been trained here when he won his Grand National back in 1938. However, in 2015 the yard trained another GRAND NATIONAL winner as their MANY CLOUDS, who also landed the Hennessy that year, was a gutsy winner of the world’s greatest steeplechase carrying 11st-9lbs.

Over the last five seasons (2014-2019) the Oliver Sherwood yard have sent out over 130 winners over jumps and during that time banked a cool £2.2 million in total prize money.

When looking out for their runners it can pay to note any they send to Fontwell – a track they’ve got an excellent strike-rate at, while they often do well with their chasers at Towcester and Newbury.