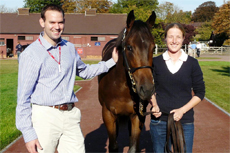 Daniel and Claire Kubler are about to embark on their fifth season training, their second based in Lambourn. They have proven capable of buying yearlings that have gone on to perform in stakes races on a modest budget and be sold on for huge returns for their clients. They have also proven they can get older horses careers back on track. They have attracted a higher level of support based on their results so far, from new and existing clients

Il Paparazzi - purchased as a yearling by Daniel and Claire romped to a five length two year old maiden win at York before finishing third in the Group 3 Acomb Stakes.

Lisa's Legacy was sent to Daniel and Claire after losing his way with a champion trainer. Arriving with a lack of enthusiasm for his work and a few minor niggles injury wise, Daniel and Claire sweetened him up mentally and built him up physically patiently before unleashing him on the track. In three months he ran a total of nine times, winning twice and only being out of the placings once improving 15lbs in the handicap. His owners Clive and Trish Wilson had an absolutely fantastic time following him and being involved in his exciting campaign.

Affileo is another value for money yearling purchase who won on debut by five lengths and was sold to leading international owners Team Valor International at a significant profit and is an exciting prospect for Daniel and Claire.